Another visit by students from the Junior Royal Northern College of Music
This year’s concert features 4 students :-

(Piano accompaniment by David Jones throughout) 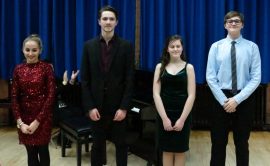 Bows at the end
(All pictures taken by Roger Evans)

This year’s group of students from the Junior Royal Northern College of Music captivated the audience at the Middlewich and District Concerts Society concert in the manner to which we have become accustomed. David Jones provided piano accompaniment throughout.

Adam Scaife (15) coped well with the intricacies of movements from trumpet concertoes by Bohme and Hummel, but was clearly more at home in an exuberant performance of “Tico-tico” by Abreu.

The singer this year was Kizzy Lumley-Edwards (15). What a voice! She sang with commendable clarity in Italian, German and English, beginning with “Bel Piacere” by Handel and “Standchen” by Schubert. She also sang pieces by Maconchy, Mozart, Handel (again) and Purcell, finishing with a delicately phrased “Poor Wandering One” from the “Pirates of Penzance” by Gilbert and Sullivan.

Nathanael Horton (17) gave an intense, achingly beautiful performance of the slow movement from Elgar’s cello concerto, followed by an equally evocative rendering of the first movement of Prokofiev’s cello sonata.

The fourth student was Rachel Burnett (16). She played “And Everything is Still” by Andy Scott, “Braziliera” (Milhaud) and two movements from Ronald Binge’s saxophone concerto. She demonstrated great technique with the saxophone and a remarkable stage presence, keeping the audience totally engaged throughout the music.

For more information about the Junior RNCM visit their own web-site (in a new window), by clicking HERE