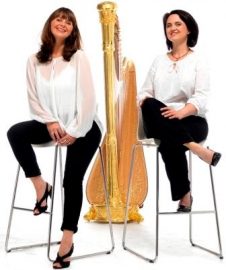 This harp and voice duo is formed by Lauren Scott (who was very well liked at her Harp concert for us in 2012) and the soprano Anna-Clare Monk who has performed principal roles at Opera North, Welsh National Opera  as well as recently returning from a tour of USA Italy and Sweden.

“If Music be the Food of Love”
The glorious sound of soprano and harp, Anna-Clare Monk and Lauren Scott,
in a sublime programme of music by John Dowland, Henry Purcell, Benjamin Britten and award winning composer Andy Scott.

For more information about Lauren Scott  and Anna-Clare Monk visit their own web-site (in a new window), by clicking HERE

“If Music be the Food of Love” seemed to be an aptly warming title for a concert in the darkest recesses of November. And so it proved. Lauren Scott (harp) and Anna-Clare Monk (soprano) enchanted the Middlewich and District Concerts Society audience with a wonderfully relaxed performance of great charm.

The concert began with songs by John Dowland and Henry Purcell, the best known being “Come Again”. Lauren then played “Chanson de la Nuit” by Carlos Salzedo. The first half ended with three songs by Andy Scott. This was in collaboration with Anna-Clare, who succeeded in locating and fitting suitable words to existing music.

The second half was dominated by folk songs, including “The Lark in the Clear Air” (arranged by John Marson), and a selection to celebrate the centenary of Benjamin Britten’s birth (“Salley Garden”, “O Waly, Waly” and “Sweet Polly Oliver”, to mention a few). Lauren’s solo was “Autumn” by John Thomas. The concert concluded with a lovely rendition of “Danny Boy”. The golden harp and the golden voice triumphed again!