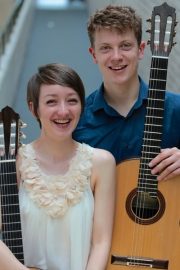 The Roth Guitar Duo are Emma Smith and Sam Rodwell

There were a few small changes made to the programme “on the night”. In the first half, the second piece played was actually “Peter Maxwell Davies : Farewell to Stromness” which replaced the advertised “Jobiana No 1”. In the second half “Labyrinth” was played before “Toccata”, and “Yvonne Bloor: Homecoming” was played as an encore.

A very enjoyable concert to end our season.

(All pictures taken by Roger Evans)

The last concert of the Middlewich and District Concerts Society’s season featured the Roth Guitar Duo, Sam Rodwell and Emma Smith. They produced a fascinating evening of music making. Even though many of the pieces they played were unfamiliar the empathy between the musicians and their sheer artistry, coupled with a view of the complex technicalities of actually playing the classical guitar, held sway throughout. They both played two solo pieces, Emma at the end of the first half and Sam to begin the second half. This provided a stern examination of technique and musicality, passed with flying colours.

Since most of the pieces were relatively short we were treated to music from a wide range of composers: Mario Castelnuovo-Tedesco, Peter Maxwell Davies, Paul Hindemith, Radames Gnattali, Roland Dyens, Stephen Goss, Joaquin Rodrigo, Toru Takemitsu, Nigel Westlake, Astor Piazzolla, Steve Reich and Manuel de Falla. The best-known pieces were, perhaps, “Farewell to Stromness”  (Maxwell Davies) and “La Vida Breve” (de Falla). “Labyrinth” (Goss) was interesting because, apart from the first and last sections, all the other parts could be played in any order. Each piece was introduced in a relaxed, but concise and informative manner.

As an encore they played “Homecoming”, written for them by Yvonne Bloor. It was serene and charming and provided an apt finale to an excellent concert and season.

For more information about the Roth Guitar Duo visit their own web-site (in a new window), by clicking HERE